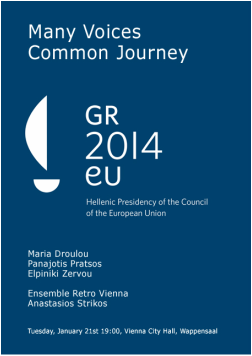 The Greek word Crisis (Κρίσις) has a double meaning: a critical situation but also the ability of judgment.

Whenever we find ourselves in a critical situation, we need to keep clear judgment in order to make the right decisions that will show us the way out. In such times I try to recall the values, the principles, the wisdom of my ancestors, not only the glorious ancient ones but also my parents and my grandparents: what advice would they have given me…? I ask for guidance, close my eyes and let my ears listen to their voices. I listen carefully and in the echoing cloud of sound that emerges I try to discern their answers: I can hear them, there they come… They come in riddles and they come in myths, they come in proverbs and in fairy tales but most importantly they come in songs!

Tonight we have chosen 28 Songs to sing for you, each like a postcard with a greeting flying to each country of the European Union. Traditional Greek songs, arranged in a European style and also songs that became famous as they were sung in other European languages. Let them awake our collective memory for this is our real homeland.

Apart from coming from the same homeland we are also sailing towards a common quest. A society of human rights, justice, freedom, education and culture, these are the original values we set sail to achieve and even if we tend to neglect them, the songs are always there to remind us.
Allow me to quote Manos Hadjidakis:

“I believe that the art of Song is a social function, because the song unites us in a common Myth. And as in a dance we unite our hands in order to follow the same rhythmical movements, in a song we unite our souls in order to follow together the same innate vibrations. As to the common myth, which nowadays doesn’t exist anymore, we shape it every time anew. Every time we feel the urge to sing…